The medium is the message

Right now?  Umm… a writer?  Earlier today I was a potter, gardener, neighbour, photographer, and recluse.  Tomorrow, I will be a worker for someone else, a commuter, possibly obnoxious or quite possibly the life of the office.
inspires you?

Takumi Sato was my friend and mentor during 2nd year at Uni.  I think he taught me best of all that a sense of humour is never out of place. 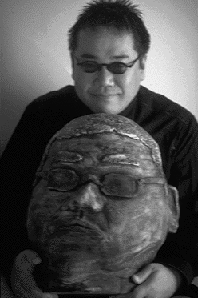 The figurative ceramics of Alan Peascod showed me for the first time that ‘figurative (shudder) ceramics’ doesn’t have to be literal.  They can be expressionistic and characterful.
Clare Curneen’s evocative work also stirs something that speaks of the internal fragility of the human condition.

ahhh… the second generation of the ceramic world.  Not all of them, mind, just the ones that seem to preen overwhelmingly over their own stuff and guard the gates of the citadel from ‘emerging’ others (unless suitably approved by various sub-committees and groomed appropriately).

WHAT
do you make?

Ohhhh… you know, stuff.
I make mugs ‘cause a good mug is hard to find.  I also make ‘figurative (shudder) ceramics’.  No, not like this:
﻿﻿

would you contribute to the show?

Examples of, you know, stuff.
does it all mean?

Ummm… 42
WHY
This is the big one – and the most interesting. Don't tell us how – tell us WHY!
WHY work with clay?

I didn’t have a choice.  Of all the media offered to me at university, clay was the only one that didn’t let me go.
WHY make the things you do?

Although all the figures I make are called ‘guys’ they are not ostensibly of the male persuasion.  Yes, they have man-boobs and people read of them as ‘he’s’, but they also have large hips, thighs and pot-bellies.  I find gender in art a bit clichéd, at least in my work, but then, I find the naked female torso very banal and incredibly venal.
I am more interested in social interaction between people who really don’t want to be there (in a multiple person situation) or just don’t get it (non-verbal communication and the supposedly intuitive exchange of ideas).  When the guys are put together in various configurations (pun intended) different stories can be read depending upon the different set-ups.
WHY would you like to be in this show?
Oh, the usual challenges regarding placing ones’ work within the context of contemporary Australian ceramics and seeing what bricks or bouquets subsequently arise.  Also, because I believe that we should stop promoting and worshipping at the alter of anonymous lumps and pots on plinths.  Clay is merely the medium we work with, make something useful or make something that says something.  The medium in not the message (to misquote Marshall McLuhan).
Posted by Charmain Hearder at 8:24 pm