This picture is of the work that I proposed for HIDDEN, the annual sculpture exhibition that is held in Rookwood cemetery. This year it was to be situated amongst the graves in a very old part of the cemetery. 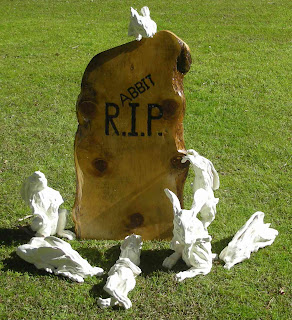 The sculpture that I proposed was intended to be interpreted on more than one level, the central element being a headstone in wood bearing the epitaph, R.I.P., not however as in “Requiescat In Pace” or “Rest In Peace” but rather “Rabbit In Peace” surrounded by ceramic rabbits,  the meaning being that rabbits are at peace in Rookwood, not in the sense of being deceased but rather that Rookwood represents a beautiful peaceful haven for all sorts of wildlife in the middle of urban Sydney.
The headstone has at its base a reclining rabbit reminiscent of the reclining effigies seen in churches from medieval times but lying on the grass thus introducing an element of ambiguity.  Is the rabbit simply resting?
Surrounding the headstone, climbing it, leaning on it, peering over and around it, will be other rabbits, unquestionably “alive”. Additional rabbits will be frolicking in the grass surrounding the headstone thus embracing the viewer’s space as a celebration of the continuation of life. The idea was that the spectators would be free to rearrange the rabbits adding a kinetic element to the whole sculpture
Unfortunately my proposal was not accepted but I still liked the idea and completed it anyway :)
Posted by rona_sissons at 4:20 pm