* One of the Goddesses worshiped by the citizens of traction cities in the amazingly awesome Mortal Engines series by Phillip Reeves - nothing whatsoever to do with ceramics but a ripping yarn nonetheless. Often cited as one of the early Steam Punk novels. 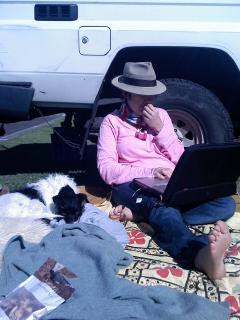 We (me and significant other and four leg*) have been on the move. AGAIN. Not just on the move, but kinda sorta homeless. It's a long and not terribly interesting tale of the Sydney housing crisis (an actual real thing) featuring way more real estate agents than you would wish for and an awfully friendly (given the circumstances) 'you can't park your truck / sleep here' Randwick Council Ranger lady.

* the four leg's name is Margie - aka beastie - or meat face

As far as homelessness goes we were incredibly lucky - privileged in fact. We could usually negotiate at least one shower a day, had friends that could offer food and shelter and never had to spend a night under a bridge or on a park bench. In fact, some of the places we stayed (both in and out of Randwick Council) were quite scenic. I mention it only by way of making excuses for my writing silence - the first image that I have posted is a picture of me (and four leg), writing - or at least attempting to - at one such scenic location. I would often, at such times, think of the many ads for telecommunications companies promoting their wireless broadband products. You can all picture the scene no? Well groomed (this NEVER happens when you're homeless) men and women in various exotic locations - tropical beaches, cliff tops etc - with their laptops open, simultaneously taking in the view and tending to their online whatevers. Let me just say, it's absolute RUBBISH! Sitting like that with a laptop for more than five minutes at a time is orthopaedically challenging, for more than half an hour it's simultaneously numbing and excruciating! So, find something to lean against, but now the sun is in your eyes, Shift to the other side, now the sun is on your screen. What about under the tree? Oh it's a bit chilly in the shade and watch out, an ant is bound to bite you on the arse... you get the drift.

The good news is that we have at last found a home - one that I hope not to leave for quite some time - and I once again have a desk and a chair and a silent space to which I can close the door and bang away at my keyboard (although flat-mate - as opposed to significant other - says that when i get ranting she can hear the keyboard banging from all the way out in the kitchen).

Perhaps in addition to making excuses, i mention my bout of homelessness as a (rather long-winded it would seem) segue into my theme for this post... the peripatetic potter - c'est moi. Over the past few months I have read, with no small amount of envy, the posts about your studio spaces - big or small, purpose built or otherwise - and I thought i would celebrate my new home by sharing an image of the blank canvas / on-site workshop that is to become our (flat mate and significant other are fellow SCA graduates) studio space.

I thought it might also be interesting to share images of some of the studio spaces through which I have meandered / dawdled / galloped on my way to this place. I often think about the idea of the journey(wo)man - moving about from one town to another to gain experience of different workshops. Interestingly, wikipedia goes on to say that this is an important part of the training of an aspirant master. I say 'interestingly' because a goodly amount of my keyboard banging / ranting today was in rejection of the term master (and all it's gendered associations with privilege / assumptions of entitlement). I wonder if settling down into my own studio space means that I will be able to call myself mistress?

Whether or not I choose to embrace the nomenclature, it is nice to reflect on the journey that has brought me here. Whether the studio spaces I inhabited were for the short or long term, whether I enjoyed them or found them entirely dispiriting, they each informed my thinking and my practice and will no doubt influence the direction of the path I take in this place of my own. Foremost in my mind at the moment is the question of what i will 'make' in this new place. I have work to make for a show in August (better pull my finger out on that one!) and another in December, but what of the in between times?

In my years as a so-called peripatetic potter, I have been as likely to immerse myself in the community surrounding a studio as in the making / playing with mud... I wonder how that is going to look / take shape at our number one campsie house. Hm, plenty of material there for a future blog post i feel, right now though it's getting late on a school night and there'll be more (hopefully less frenetic) bashing of the keyboard to keep me busy tomorrow.

Until the next post I hope you enjoy the images. I'd love to hear about your (ie my fellow bloggers) peripatetic experiences and some of the studios you've inhabited over the years. Wondering Owen, how you've found the studios in Kansas compared to home for instance. 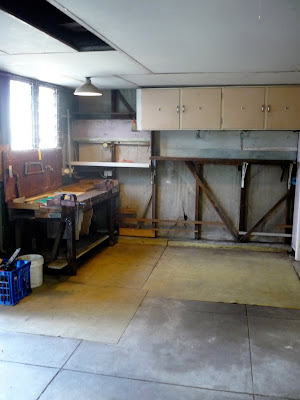 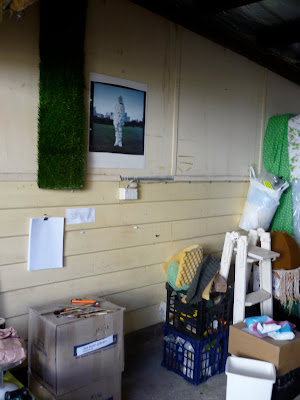 2. An attempt at setting up studio in the garage of the mountains house - hard to get excited about setting up when it was such a short stay. Table (not pictured) purchased from the Bower (awesome place you should check it out www.bower.org.au/) was dragged inside for additional keyboard banging space. The portrait of Christo has followed me since my days as a primary school art teacher in Queensland. The astro turf i found on the street - i have a bit of a thing. 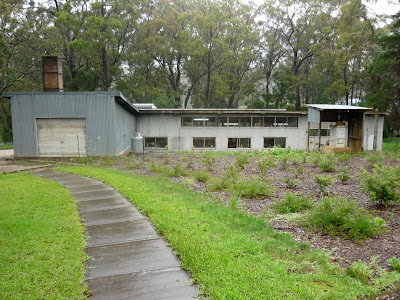 3. Ah yes, the famous Sturt Pottery - what a year eh?
They say that which does not kill you makes you strong. True. 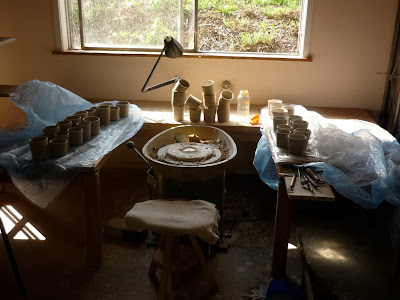 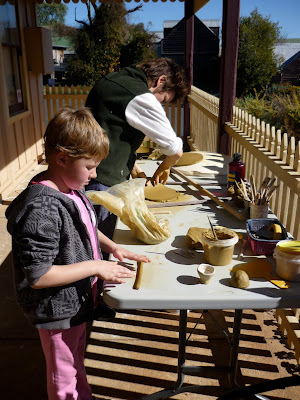 5. Gulgong - Cudgegong Gallery Artist in Residence -
in the verandah studio (Mayne St) with the local kids. 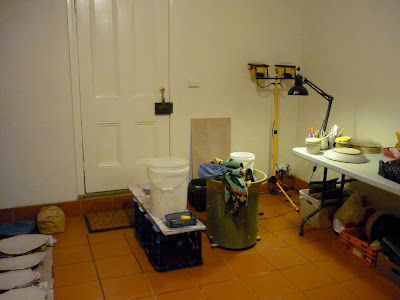 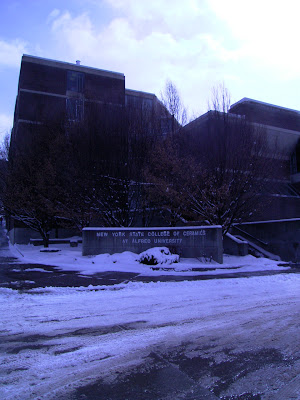 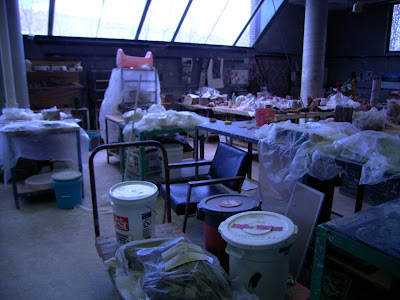 8. Junior wheel throwing with Albion Stafford who spoke about pots like no-one I had ever met before. This was our class space. If i confessed to a mild(ish) case of OCD would you understand the horror of this situation? 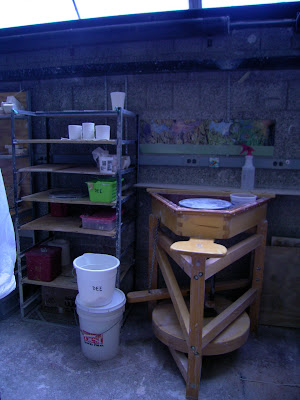 9. My beautiful wheel (Bernie was good for something eh?) at Alfred.
This wheel and shelf were my entire studio space. 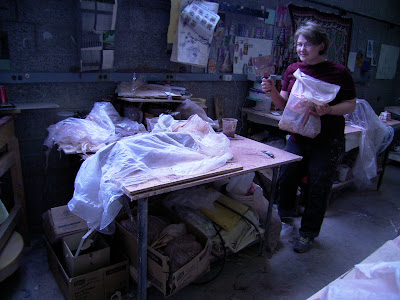 10. My incredibly talented neighbour Jenny (you can see the edge of my wheel to the left). She and all of her classmates - in Walter McConnell's class were making enormous sculptures with a fabulously rich iron bearing clay. The red dust would drift across my wheel and my porcelain (made from scratch in the incredibly well-equipped clay mixing room - everyone should have Pete the pugger in their life) and every other surface in the place. Jenny was also known to borrow tools indiscriminately - she would always return them - clogged up with red clay. Think about the OCD. 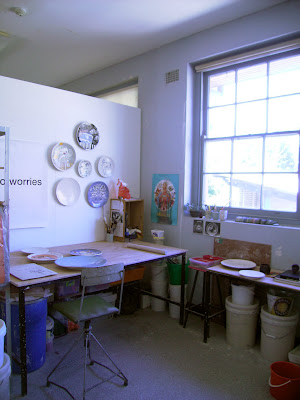 11. SCA. 3rd year. Felt like home. The 'no worries' poster came from a work at the AGNSW one Biennale - gave me goosebumps - god i love it when art does that! 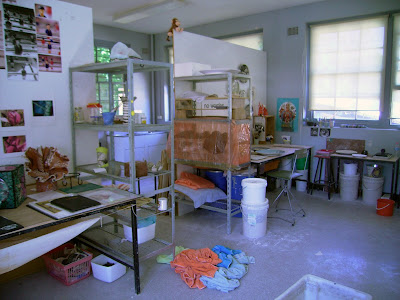 12. But a shared studio will never be without it's hazards to the obsessively inclined.
* Before i landed at SCA i had a stint at the Jam Factory - it was so dismal I don't have one single picture - i will see if I can't find an image of the puppet / parade workshop - heaps more fun!!! 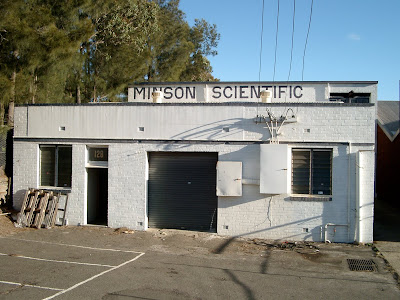 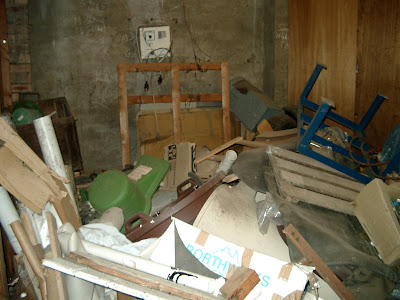 14. How it looked when we arrived. 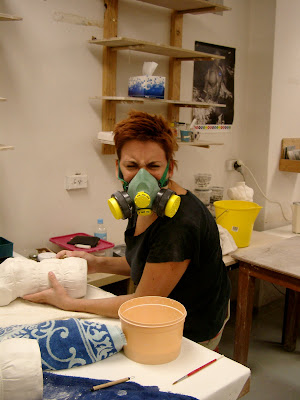 15. COFA - where it all began. Yes, to my great shame I am sanding - inside. Never would you see such a thing these days! Mardi Gras poster in the background belies an enthusiasm for parades (I worked for some years in the Mardi Gras workshop) that would grow and evolve in Adelaide. Fun and games!
Posted by dee taylor-graham at 12:54 pm