I meant to post this last week… I don’t know where time has gone!
I just wanted to mention another two inspiring artists here that I feel a strong connection with. Gudrun Klix and Clara Hali are both ceramic artists living in Australia who, like myself, started out their life on another continent. Without going into too much detail, Gudrun Klix’ work deals with the experience of being an immigrant in this country (for instance her work ‘Uprooted’ in McGrath, V., ‘Landscape, Land and Nature’, Pottery in Australia, March (2002), 16 – 21.).
Developing a sense of belonging in a new country is often what preoccupies an immigrant, nomatter how long he/she has been here. Like myself Gudrun Klix finds that the immediate experience of the land plays an essential role in 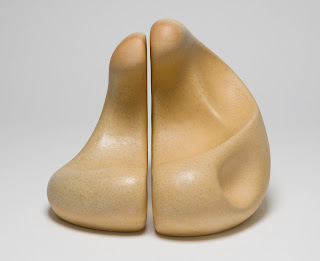 this process. My bushwalks are a very important part of this. I also think, however, that connecting with the people in a new country is just as important and in my work I have expressed that with pieces that suggest forms that are interacting in some way.
Shared History I, 2009, coil built earthenware,soda fired, 51 x 53 x 49 cm. Photograph by Ian Hill.

Clara Hali, I met in 2008 at her home in the Blue Mountains. Her work originally focussed on the female figure and was inspired by various examples from art history. When Clara moved to the Blue Mountains, after having lived in Sydney for a long time, she started recognising her work (for instance ‘Angkor Torso’) in the natural balancing rock formations in the bush. These rock formations metaphorically reflect the precarious nature/balance of our own (emotional) well-being. (Hali, C., ‘A figurative Presence: Sculptural Transformations’, thesis submitted in the fulfilment of the requirements for the degree of Master of Fine Art, National Art School, Sydney, Australia March 2007; conversation with the artist in 2008).
Gradually the Blue Mountains started to affect Clara Hali’s approach. Rather than recognising her work in natural formations, she is now directly inspired by the natural world around her, not just by the forms, but also by the emotional analogies she sees (like resonances with her own emotional life), especially in the balancing rock formations. On another level, as an immigrant, Clara has finally found a significant connection with the Australian environment. It is a great experience to meet someone who has a similar approach to creating art!
Example of my own work and inspiration: Bricolage of the Self, 2009, coil built earthenware, soda fired, 45 x 45 x 23 cm. Photograph by Ian Hill. 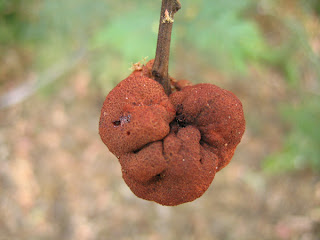 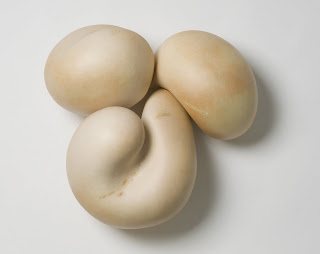 ***
There are many different ways of working with nature as a source of inspiration. The artists discussed here each have their own way. They have inspired me (and I’m sure they will continue to do so), and they have helped me to gain a better insight into my own approach, which is different again.
At the moment, my work is changing, and I’m trying to work out precisely where it is going and why. That is not always clear right away when working intuitively. Research into Venus figurines as a way of making a (European) ancestral connection while living in a new country, has had a more figurative effect on my work. To be honest, I’m not sure how I feel about that yet. The work I’m making now is somewhere halfway between the figurative and the natural, organic form. While my work so far seemed to be a transformation from the natural form to a form suggestive of the human form, it now seems to have become a transformation from the human to the natural form, and the textures I’m starting to work with seem to work in that same direction. Where my work is concerned at the moment, it feels like I’m in a strange place. A place full of uncertainty, but I guess that’s exciting at the same time because it gives me a lot of freedom. It could go any direction from here. Who knows!?
Some recent work in progress (and experiment with new texture): 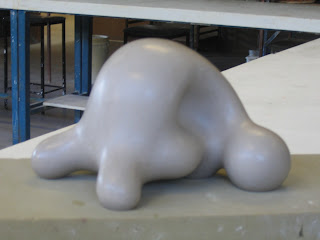 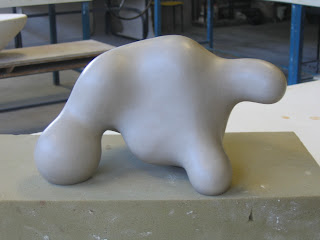 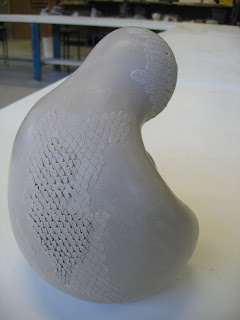 Posted by Maria Vanhees at 1:52 pm