As promised, here are a few more Australian ceramists I wanted to discuss. I admit, it is a lot, but it will help to explain what my work is about too. I will also show you some of the work I made over the last few years.
In 2000, while travelling in Australia and more or less being a novice in ceramics, I saw an image of ceramic work that really appealed to me. It was a curved, ‘moving’, leech-like form. I carried a quick sketch of it with me for a long time. Later, back home, it inspired me to make a couple of pieces myself, which, unfortunately, I never got to the glazed stage. (I couldn’t decide, it needed something, but I didn’t have sufficient knowledge at the time to find something that suited it.)

The point was though that the curves and movement in form were very much what I had already been working with in my own work before. The work that inspired me had in itself clearly been inspired by the natural world, another thing that it had in common with my work. Later, in 2004, I discovered who the person was behind the work that had inspired me: Neil Hoffmann.
Since then I have learned more about his work and the philosophy behind the work from reading articles like
· McGrath, V., ‘Landscape, Land and Nature’, Pottery in Australia, March (2002), 16 – 21.
· Buckle, S., ‘Clay X 4’, Pottery in Australia, September (1999), 29 –31.
Without trying to be complete here, Neil Hoffmann’s ceramic sculptures seem to echo the primordial geophysical processes that eventually created life. As he said during an inspiring talk at the Sturt Woodfire conference in 2008, he wants to make pots that he calls
“The Umibilicals”: “… pots to link us in the everyday to our ancestry, pots that might assist us to see the earth, the land, the landscape, as something more than simple matter, but common, not only to all humankind, but to all tenants of this earth, a heritage of connectivity, a common point from which we all grew.”
This does not just affect the form, but also his creative process. He aims to work in analogy to these geophysical processes by trying to exclude the hand (and the mind) of the maker. He stretches and throws clay around for instance rather than carefully handbuild it. 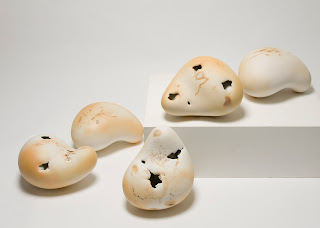 While his work and approach are inspiring, the thinking behind the process –although very interesting— is not something that I follow him in. Carefully handbuilding has its strengths too. For me the time spent doing that is the time to switch off, to switch from the left to the right side of the brain, to allow my intuitive and emotional self to express itself, time to let go of control. So even though my work is initially inspired by forms I have observed in nature, in the creative process it becomes imbued with my personal emotive make-up, whether I’m conscious of it or not. 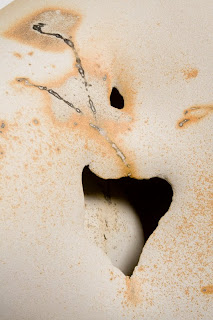 In 2007, I attended another ceramics conference in Gulgong. One of the people that inspired me at that time was Toni Warburton. Toni’s workshop was a very active and interactive one. She took a group of us on little journeys every day, each of us carrying a not quite leatherhard thrown pot with us. If I remember well, depending on the instructions of the day, on our walk we would for instance collect objects and textures that appealed to us, draw our journey and work these elements in one way or another into our pot to create a representation of that journey. It is a method that Toni herself applies in different ways to create a narrative in her hill-shaped pieces. (see Boscacci, L., ‘Gestures Accumulate’, The Journal of Australian Ceramics, 46, no. 1 (2007), 25 – 28.) Sometimes a piece may combine (natural or other) elements from one place, other times it may be events and people that are important to her at one time in her life.
During the last of Toni’s workshops at the conference, I found myself walking away from the group with my pot. I found a quiet spot on top of a hill and while I was looking around, absorbing the landscape, my hands kept working with the clay, shaping and reshaping it and eventually closing it up. I soon realised that this seemingly insignificant piece confirmed something important about my own work. 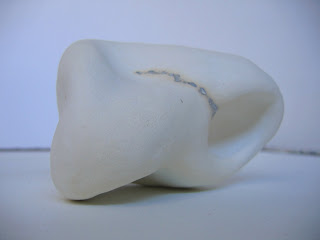 When inspired by forms in nature, I start by making something that looks like the original. But by the time I’m happy with what I’m doing a transformation has taken place, often a transformation that turns a natural form into a form that suggests a living being, if not a human form.
It is as if in that process a connection takes place with what lives within me, emotionally. This was the first time something like that had actually happened in relation to a landscape as a whole as opposed to a smaller natural form. The piece and the related experience inspired me to create ‘Matrix’, a piece that expresses for me how I experience and interact with nature. 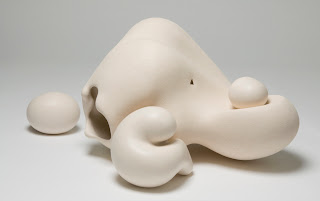 In a conversation with Toni in 2008, it became clear that going through the creative process changed her. It kind of re-valued the place people and things take in her life. With my own work, I have come to realise too that a change within myself takes place during the creative process, even though that is often not clear until well after it is finished.
While Toni Warburton often creates literal and figurative narratives in her work, the events represented in my work are of a more metaphorical nature, often created as part of the firing process: marks, ‘scars’, subtle flashings of colour. The process of soda firing has written a history of firing representative of a life-history into the ceramic surface.
The work and research on soda firing by Gail Nichols has strongly informed my own firing technique. I have successfully tried her slip and soda recipes as well as her technique of introducing the soda in the kiln. But while Gail Nichols works with stoneware temperatures, my own work is only fired to earthenware temperatures to achieve subtle flashing effects. I also use less soda in a firing. 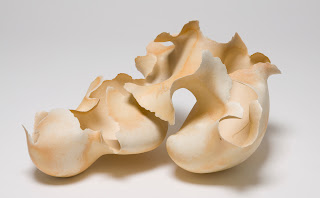 This generally retains the clay quality of the surface without covering the form with a thick layer of glaze. I also include natural combustible materials in the firing, which leave marks on the surface. These materials have been picked up on bushwalks and they connect me to the place where I now live: Australia!
(Image: More than Skin-Deep II, 2009, press-moulded and coil built earthenware, soda fired, 53 x 47 x 34 cm. Photograph by Ian Hill.)