If the overalls fit…

Well, once again it has been an age – life does have a way of hurtling along…

I must confess, I have felt a little like a child on one of those (totally awesome) old school playground roundabouts. The initial squeals of delight turned into hysterical giggling some time ago and more recently became breathless sobbing / crying / pleading for it to stop so I could get off – just for a minute. Like a child, I will no doubt be clambering to get back on in no time – but for the minute I’m quite enjoying having my feet on terra firma – or something like it. After years of nomadism / gypsydom it feels awfully good to have a home. What’s more, I’ve managed, just recently, to join the ranks of the gainfully employed. Having survived a gruelling application / interview process* I am pleased and proud to say that I am the new Studio and Technical Supervisor for the SCA ceramics studio.

* I’ve been known to describe the writing process as akin to getting blood from a stone, but this was something else entirely – HR language is a thing unto itself - essential criteria / S.M.A.R.T writing / cover letters etc – phew – give me dense French theorists – (or even Judith Butler) any day!

There is so much about this position that is wonderful – but I think the best part is getting to spend my days at the place I love the most – Sydney College of the Arts. Does that sound really naff? Possibly. True nonetheless.

Stepping into this role means that I’ve some really big (metaphorically speaking of course) overalls to fill.* I’m sure I have the girth; I hope I have the heart. 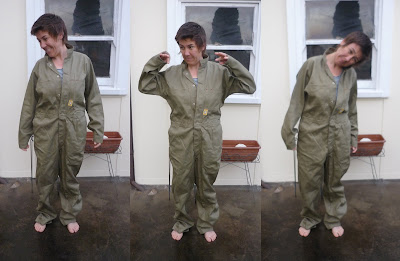 *Clive was (much loved) Technical Supervisor in ceramics for almost as long as I’ve been alive. In my travels I’ve bumped into many SCA alumni and every one of them has said, ‘Oh, say hello to Clive for me.’

Truth be told, it’s great to not only be hanging out at SCA every day, but also getting paid to do so! The last time I had a regular pay cheque to speak of was in 1997. Since then I’ve done all sorts of things… 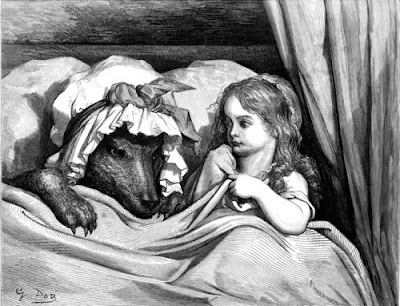 I’ve run workshops, taught art (and other things), made coffee, waited tables, cooked – on occasion I’ve even been paid for my art. Which brings me to the point of this post*... the idea / hazards / process of making art / pots to make a living.

* apparently I’m determined to win the prize for the longest segues. There is a prize for that no?

As I write this post I’m drinking genmaicha from a teapot and cup made by Sandy Lockwood – a going away present from Sturt chosen for me after a line of questioning that went something like… ‘Well Dee, what potters DO you like?’ 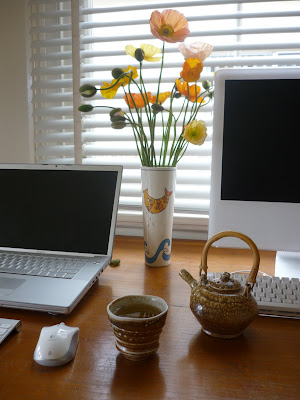 Sandy’s pots are beautiful – her throwing style makes you want to hold / touch them and the wood-fired / salt glazed surfaces – yum. For a short while I had one of her mugs in my home in Mittagong - the wolf was obviously far enough away from the door for a moment to justify the expense – and it was worth every cent* When the handle broke I mended it and forged on until a second attack of ham fistedness saw the entire thing shattered :( One of her mugs also lived in the Pottery – I managed to keep that one intact for the duration of my tenure and most every day took it with me to the café – just the right size for a double shot soy café latte (former barista remember / coffee w#nker).

* I wonder at those potters who sell their work very cheaply – how does an $18 – retail! mug reflect the cost of labour, materials, fuel and so on?

If ever there were a time that I was going to sell pots for a living, surely my residency at Sturt would have been it. The residency program there is set up with just such an end in mind. Residents are encouraged to provide stock for the shop, which is, as Keiko mentioned in an earlier post, a really lovely venue in which to display one’s work. Nice lighting, beautiful surrounds, knowledgeable staff and relaxed punters willing and able to part with their readies – what more could you wish for?

I did, during my stay, sell some jugs 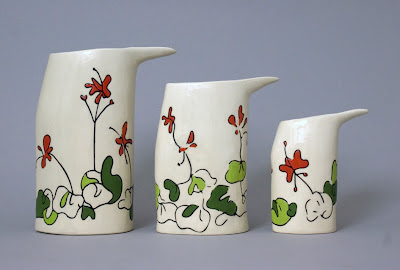 And a bunch of beakers… 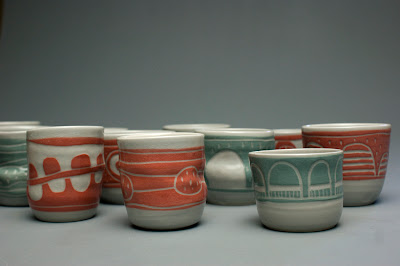 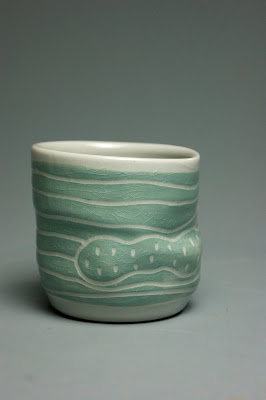 But if the truth be told, my heart was never really in it – the making stuff to sell business. I was teaching (enough to keep that old wolf away) and loving it. Beyond that, I wanted to play* - and I wanted to see who I could get to come along and play with me.

* it looks and feels like play – but is actually deeply enmeshed in the concepts / philosophies of relational aesthetics and a pottery driven reworking / reimagining of Bourriaud’s ideas.

We built a pizza oven, 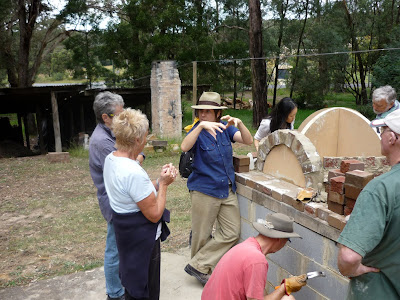 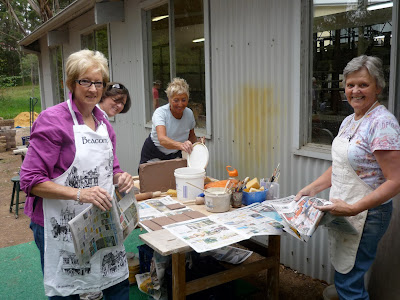 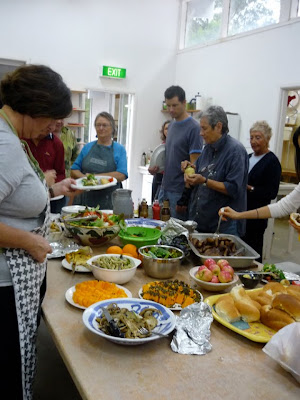 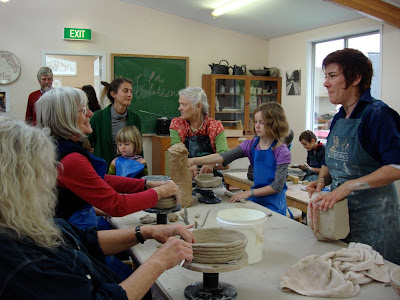 And had a big lunch to raise money for the local Salvos at Christmas. 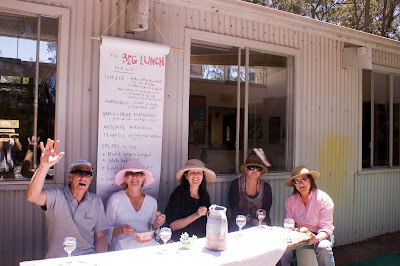 All great fun and games. But not terribly lucrative… on a couple of fronts.

Firstly, whilst it’s all well and good for me to question the makers and sellers of cheap pots, it must be said that all the hours of work that went into planning, preparing and hosting these events garnered me not one cent of personal profit.*

* Not complaining or looking for sympathy – it’s a thing that artists do. No? Does anyone remember the awesome NUCA (Network of Uncollectable Artists: Australia’s 50 most Uncollectable Artists) Bubble Gum cards that were around in the 2004 Sydney Biennale? This one of Deborah Kelly’s (I have a total art crush) was my favourite.

Secondly, and this was far more challenging than the personal profit thing (one gets quite good at living on the smell of an oily rag and a bit of deadline fuelled adrenaline), the ceramics community, and Sturt in particular, with its long, rich history, is structured around the idea of the finely crafted OBJECT. The beautiful ‘thing’ to be held and admired and ultimately, purchased / owned. Fun and games are just that, and ought not be confused with the serious business of craft – which is of course, not to say that craft can’t be fun – anyone who has ever been to one of the Gulgong clay events will tell you what fun they had. But… 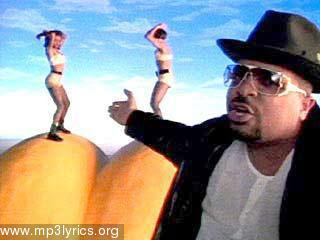 one that takes in the question of ‘What is ceramic?’ or ‘What does that have to do with ceramics?!’

Oh dear, I have opened a can of worms (in my own head at least). And it has gone from being afternoon genmaicha time, to way past my (school night - one of the things about gainful employment that I'm still getting the hang of) bed time.

Posted by dee taylor-graham at 8:36 pm