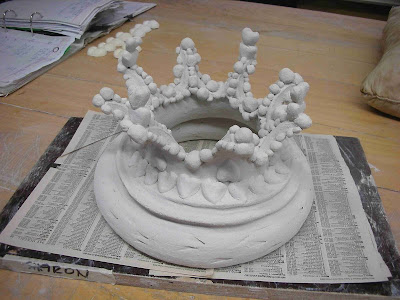 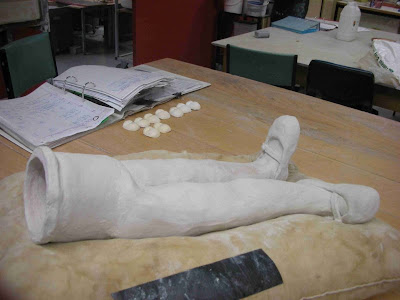 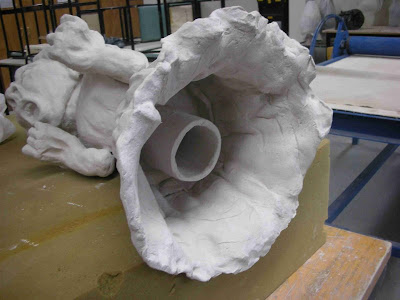 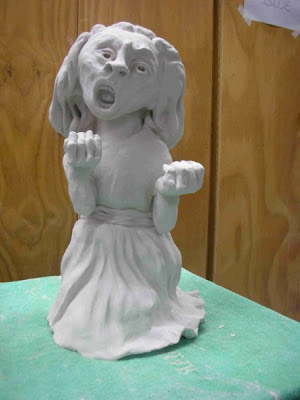 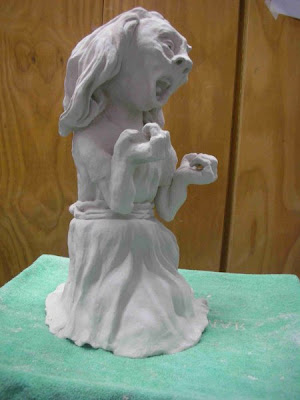 I thought I would share with you the figure that I am currently working on and the joining technique I propose to use to increase its final size.

The figure is Queen Alice from the feast at the end of “Alice through the Looking Glass”. The height of the finished piece will be over a metre. I am making it in three parts, the main part of the figure, the legs and the crown.

I have made a similar figure previously in two parts with the legs made separately and the join camouflaged by the skirt. Once fired, I proposed to glue the two pieces together on an armature however the join never really fitted together very well making the figure a bit unstable so , this time, I have designed the join as two interlocking cylinders which will fit together under the skirt. Both parts were constructed on an armature and the final figure will be assembled on a single armature which will run through the left leg and up into the body. Hopefully this will make the figure stable enough without having to glue the pieces permanently together. The crown can just rest on the head. I may glue it into place but I also plan to experiment with museum gel to see if this will make it stable enough without gluing.

It the assembled piece is stable enough without gluing then I will keep the three separate parts which will make it much easier to store and transport (I only have a very small car!).

I am using paper clay which will also make the finished piece lighter. Currently the main piece is about as heavy as I can lift! The one thing that worries me is that the cylinders may warp in the firing and no longer fit together. It is a bit of a trade off making them fit tightly enough to ensure stability while allowing for possible warping. I have found that paper clay can warp quite significantly and I would be interested to know if anyone else has experienced this problem and if they have any remedies.

Anyway, hopefully all three pieces will emerged unscathed from the kiln in the next few weeks and I will be able to post a picture of the final figure:)