Another area that interests me is the art of caricature. I first encountered ceramic caricature sculpture in the work of Daumier, a French nineteenth century political caricaturist, while researching a project for TAFE. I decided to give it a go and, somewhat to my surprise, was able to get quite recognisable likenesses of some (although not all :)  people!
The following is my 2010 entry in the Sydney Teapot Show at the Inner City Clayworkers Gallery in Glebe entitled “BUSHell’s white(house) tea” and “Obama black tea” respectively. 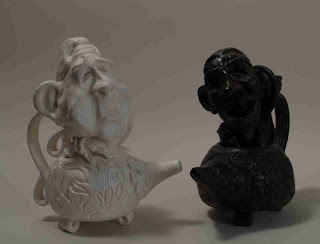 I do have an entry in this year’s show which has just opened and I will publish an image of it later in the week when we visit the gallery on Thursday. It also incorporates another politician, hopefully instantly recognisable!
I also decided to revisit the idea of a “Hung Parliament after encountering the  caricature, “Thatcher hung by Scarfe”.
Gerald Scarfe is a famous British caricaturist and was no fan of Thatcherism! So here is my take on “Thatcher hung by Scarfe” 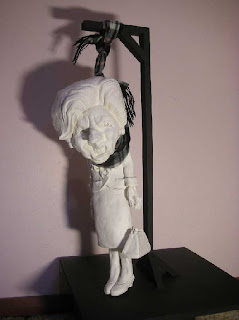 I guess Thatcher ism is a bit dated by now so I’ve updated the general image with our current political leader as “Hung Parliament”. 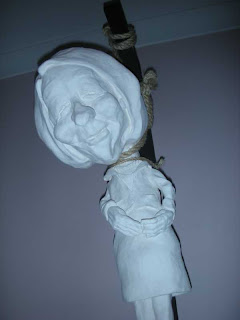 Finally I decided to attempt a more light hearted attempt at caricature so here is my version of the Rolling Stones, a contemporary portrait, initially inspired by Keith Richard's appearance in "Pirates of the Caribbean"! 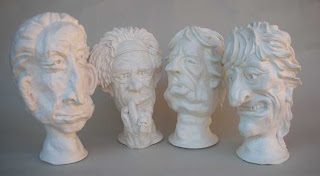