Owen Carpenter- The week that was 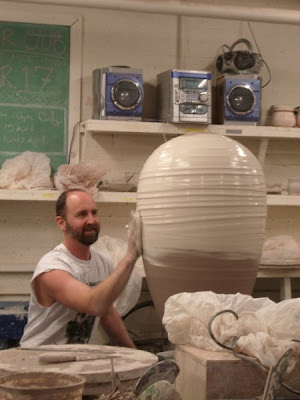 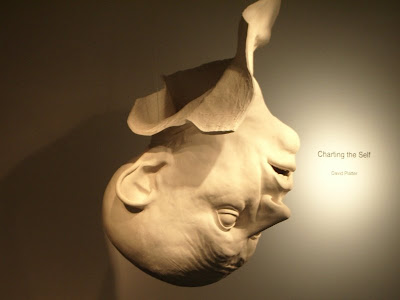 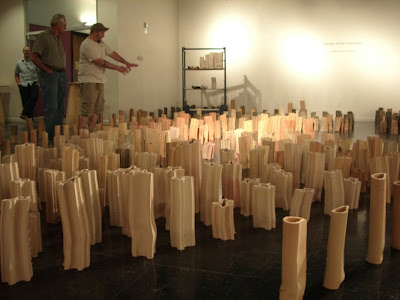 Hey pottery people, so I have a lot to share this week as it was a busy one with a visiting artist coming to KU, a pit fire, a trip to a collaborative studio to help put together a large commission piece as well as two of the MFA students putting their large works on show. Yes lots going on! This is why I really enjoy travelling to different parts of the world and sharing experiences with people.

First off we had a visiting artist come and work and lecture for two days this week. Danny Meisinger is a Kansas studio potter who apart from two semesters of undergrad at KU is mostly self-taught. He throws large pieces and works a lot at altering forms on and off the wheel. One of those potters who just makes throwing large look easy. He is so good at throwing that he worked as a demo guy for Brent wheels at NCECA a couple of times. See photos of some of the stuff he showed us ….It was a fun couple of days being able to just watch and be inspired to do things outside of the box.

Also this week I was fortunate enough to be involved in a pit firing with a couple of the other students, we fixed the pit up and built a new wall then packed it and fired it off on Wednesday night. This morning (Saturday) it was still hot and smoking despite it being covered and sealed for two days. But we opened it up anyways and dug it out slowly letting it cool over a few hours. Was good fun despite the stink of the cow dung we covered it with to seal it up and keep hot. See photos…

Also worth sharing are some photos of the grad students show, we had a good time carrying David Platters large sculpted head into the gallery space. The other work was by Geoffrey Steven Kunkler, Garden of the Forebearer, this was a great ceramic instillation that you could walk through and observe the various shapes and glaze colours of the hundreds of extruded pieces.

As for the Paul Soldner picture and the Budgie Smugglers, the lecturers here as well as some of the older students can recall a big nudie run one NCECA that was instigated by Soldner, which and ended up in a pool?. He truly was one of a kind, perhaps we should bring this type of expression back too ceramicsJ. As for different names for the smugglers here they don’t really wear them any more unless they are swimming competitions and so don’t have a cool name for them.

As for inspiration which many of the others contributors have commented on, I feel like I’m still saving up all my inspirations, as well as learning more each time I work in the studio. If you were to ask some of my colleagues at the moment they would probably say I’m just trying to make the material do things it shouldn’t. I like to push the limits of ceramics. I probably spend more time doing that right now than I should be, however as I am overseas right now I’m trying not to fire too much work because getting it home would be expensive. Some photos here show the thin slab work I’m producing right now. I want them to produce a tower stack that gives a sense of anxiety to the viewer, I was told a couple of days ago that a young student who had bumped my table and collapsed a leather hard tower with a bone china tea cup balancing on top was really worried. This made me smile because that was the whole purpose of it, I knew it would collapse sooner or later. She was ok about it once told. 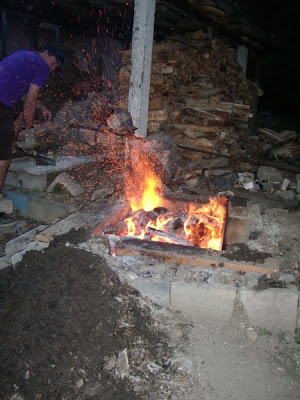 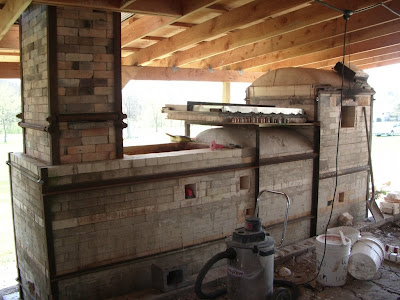 So that’s it for this week, I’m really enjoying reading all of your posts and hearing about what other people are working on.

One thing i didn’t point out was the photo of the great wood fired train kiln an the KU wood facility it was fired last week and got to cone 13 easy, next time will be fired slower and more controlled as many pieces melted at that temperature fun fun.

Posted by Shannon Garson at 8:51 pm