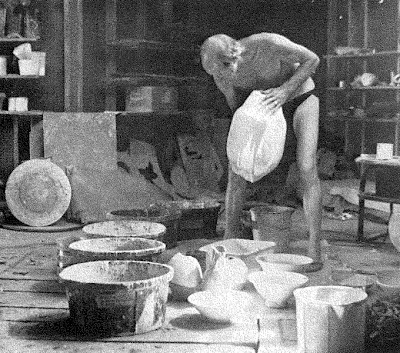 As promised, I threw myself into the journals at uni this week. Given that I spend my days in town / at school rushing about like a lunatic - it really was throwing. I pounced upon the oldest copy of Pottery in Australia that we have (1975)² and this, as you may well imagine, caught my eye...

The image is from an article written by Janet Mansfield about her time spent at Anderson Ranch in Colorado. She says, 'Professor Paul Soldner, well known American raku master and teacher of ceramics, has had an opportunity to put into practice some of his theories of education... a free osmotic exchange of information, skills and philosophy.'º

I was actually fortunate enough to meet the legend himself at NCECA in 2008 - came home with an autographed poster featuring a naked Mr Soldner being 'oiled' by several naked ladies - apparently 'a well oiled soldner is a happy soldner'. Evidently he wasn't ever shy about getting his gear off.

Aside from the cringe factor (i can't help but imagine any number of my former teachers rocking out in the studio in a pair of speedos and thongs - hopefully right about now you're all having a similar problem) the photo got me thinking about our current 'obsession' with OH&S. When i was studying, fellow students and I would try and get away with (fairly innocuous) things, whispering to each other 'Don't tell Clive.'** As a teacher I rarely make a visit to the studio without reminding a student to put on some appropriate footwear. In my own studios (there've been a few over the years) I'm pedantic about dust and chemicals, I try to be mindful of good manual handling practices and I'm sufficiently OCD that i can't imagine working in footwear other than my Blundstones.

Some people say it has all gone too far - the nanny state won't rest until it has stifled all creativity. And certainly trying to do things within the institution can be difficult at times - but I for one would like to keep doing this (making pots) until I'm at least as old as Paul Soldner - who it would seem, never suffered for his choice in studio apparel.

What do you think?

* I'm guessing that the crew at Anderson Ranch wouldn't have called these budgie smugglers - does anyone out there know what they call then in the states? Owen, maybe you can do a bit of (very serious and important) research while you're in Kansas??

² I know there are much older copies of Pottery in Australia at Sturt - I would often pull a random issue out of the cupboard in the pottery to read while I ate my lunch - and I'm pretty sure they have at least one copy of every issue released stored in the Sturt Cottage... anyone down that way?

³ with thanks to the awesomely lovely library staff at SCA for scanning and emailing said image.

Posted by Shannon Garson at 8:10 pm